Sooo…breakfast today was just CRAAAAAZY. We went to that place called Portage Bay cafe that serves the biggest pancakes i have ever had and on top of that you can add as many/much raspberries, strawberries, maple syrop and whipped cream as you want, as many times as you want.

i have too admit i was not able to finish everything. It was monstrous.

After a few hours we managed to move again and took a tour of Seattle University.

and after a really disappointing shopping trip we drove to the beach.

In the evening, we went to see the STORM (the Seattle women NBA team) play thanks to Sash’s friends who actually own the team ! It was a great game, so much fun, many punches, damn those women are big…unfortunatly they lost 😦 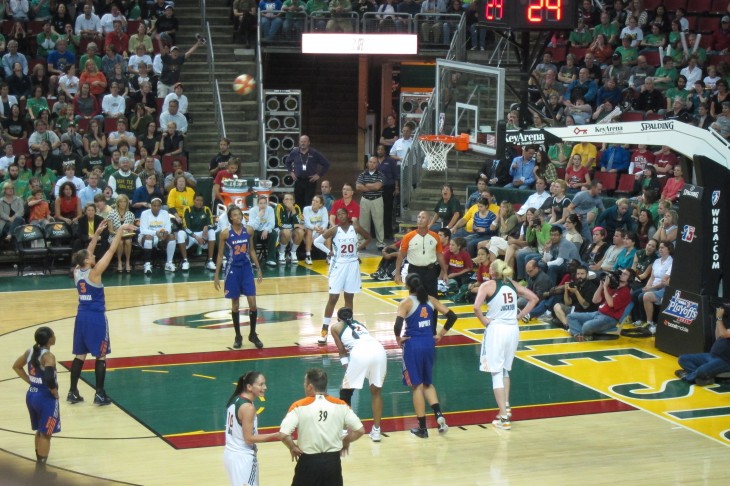 We followed Camelia’s Cupcakes recipe for half of them, chocolate with peanut butter frosting (OMG !!!! still amazingly good) and we found another recipe chocolate with pepper in the frosting ! It gives  the cupcake a crazy hot taste ! Awesome.

We spent more than 3 hours in the kitchen and is was fun fun fun…and gosh we were so proud of ourselves.

Then we dressed up and drove to Sash’s friends  for anight of FUNNN ! 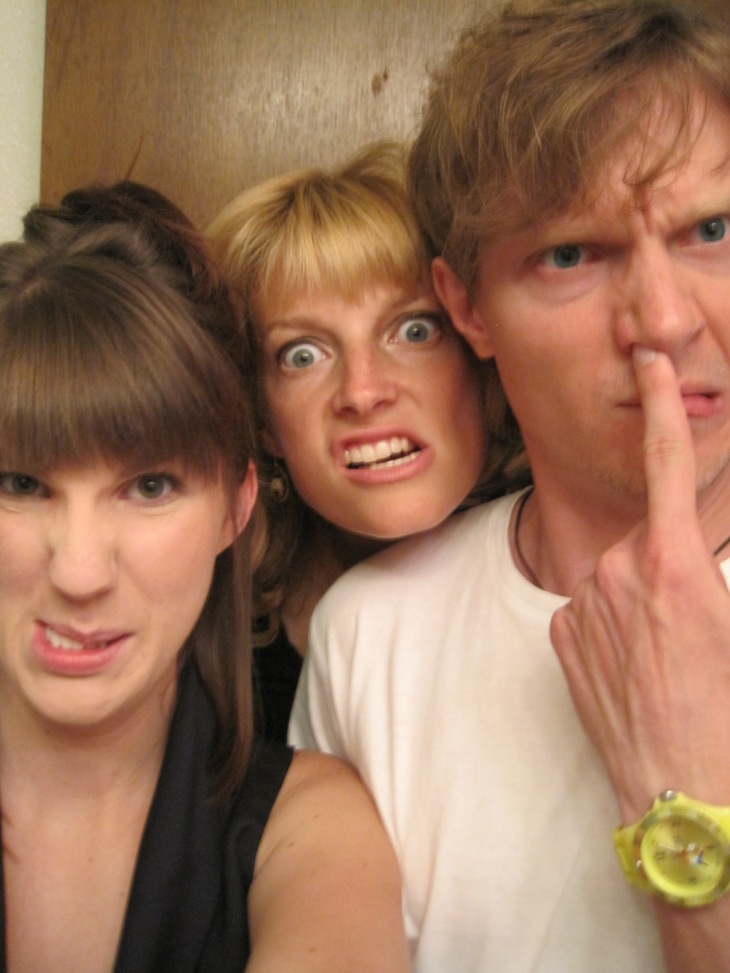 We went out for diner with some of Sash’s friends on Thursday night, we went to this really nice restaurant downtown called Purple specialized in wine and cheese…helloooooo. You could order 3 different wine to taste for 14 dollars ! 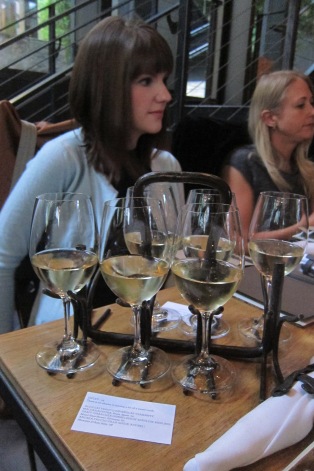 After diner we wanted to go have some drinks in a bar but we could not get in cause we did not have our passports and apparently our ID were not enough to prove we were over 21…seems like the state of Washington is super strict about this.

Friday morning we decided to start working out for real and started Jillian Michaels’s 30 days work out video ! YEAH, for real. 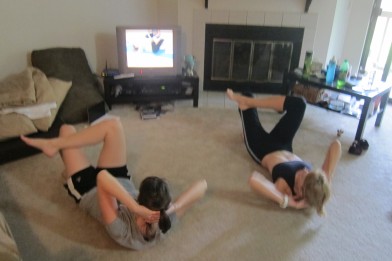 Then Sash and i got manucures and pedicures !!!! Soooo awesome, just like in the movies, one woman taking care of my feet, another one doing my nails, chatting with Sash about a stupid TV show on tv…it felt unreal. She even got me to wax my eyebrows….Hurts like hell but…well it DOES look much better. 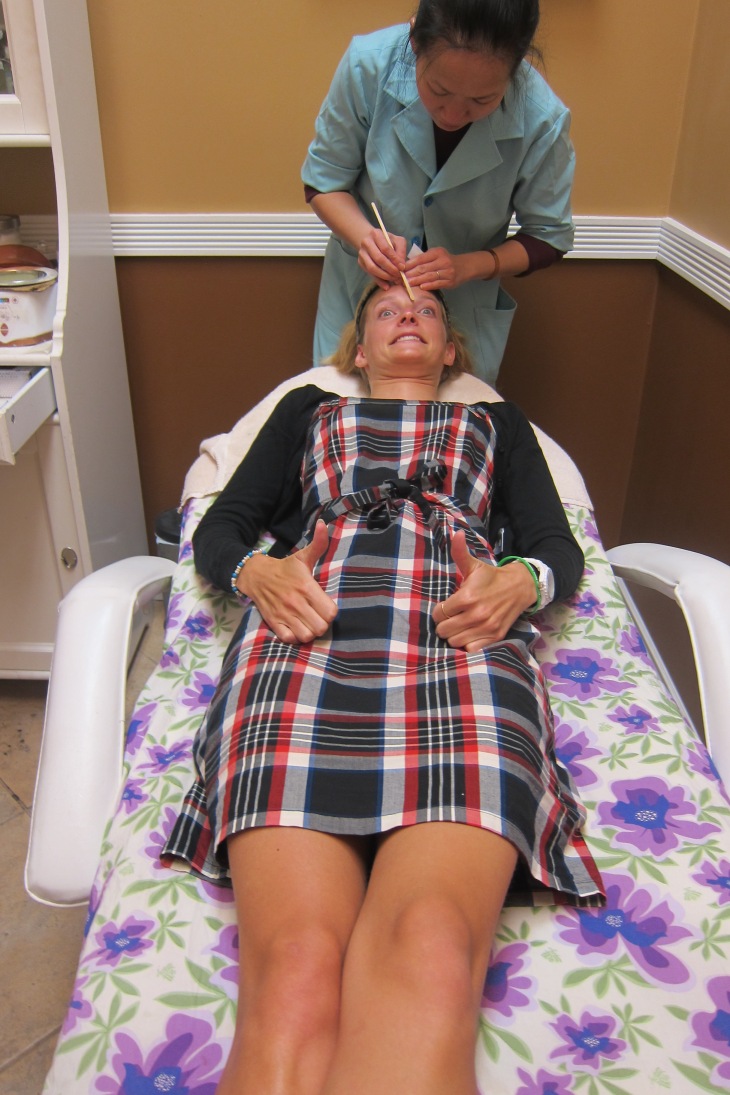 Then we went up the highest building in Seattle, the Colombian Center, much higher, and cheaper, than the Space Needle.

Crispin visited last week, it was AWESOME ! I had taken some days off and we enjoyed Stockholm under the sun together !

It’s always a lot of fun to play the tourist in your own city, it’s even funnier to do it with Crispin.

We were invited to Cindy and Marcus’s “Shtekare” theme bday party. So we dressed up and that’s always so much fun too.

and we baked…A LOT !!!!!! It was so cool, Crispin had so many ideas, we made so many different cupcakes and a super cool duke bday cake. I think everybody liked them ! 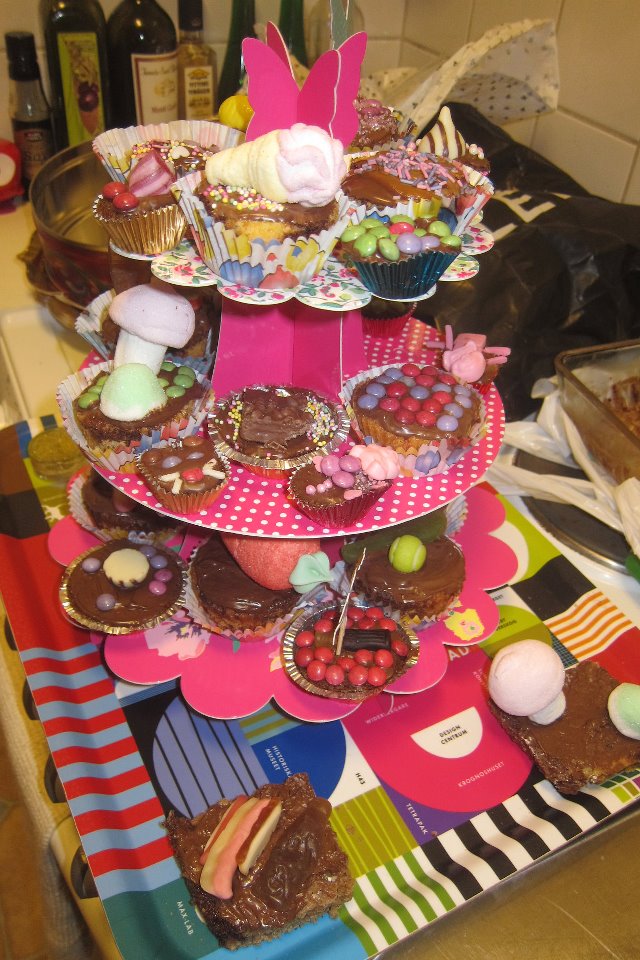 and of course we went to Eric Saade’s concert !!! 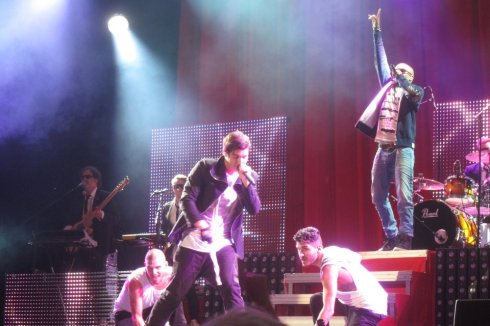 after a week under 35 degres, it really was a chock to come back to France, and to Gerardmer. Under the rain. Pretty much every day. But who cares when you have an awesome/slightly crazy family to spend your time with?

a week in Gerardmer is all about…food, walks, training (for some people), food, reading….food. 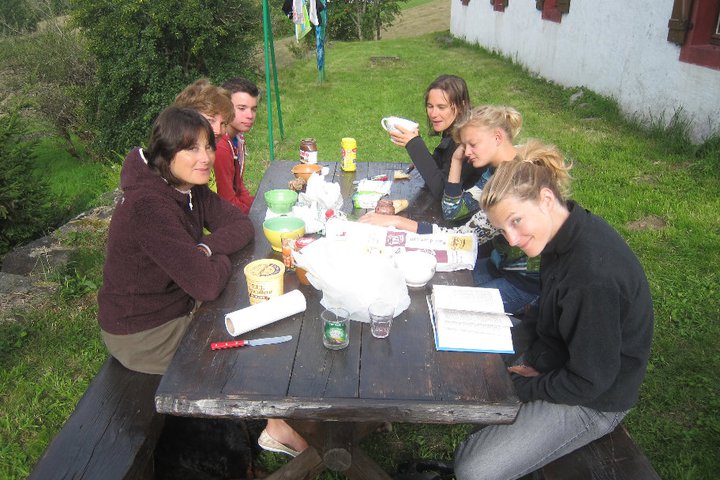 and i got to spend a week with my Boubou who was crazier than ever!

The next morning (13pm) some of us had brunch at Berns. Was my first time there but i had noticed the excitement in Alice’s voice everytime she mentionned the “dessert buffet” so i really was looking forward to it. I wasn’t disapointed. Did you know that for 55sek (about 6-7 euros) you get to enjoy the all you can eat dessert buffet????

And so we did.

Be prepared to hear the excitement in MY voice now. 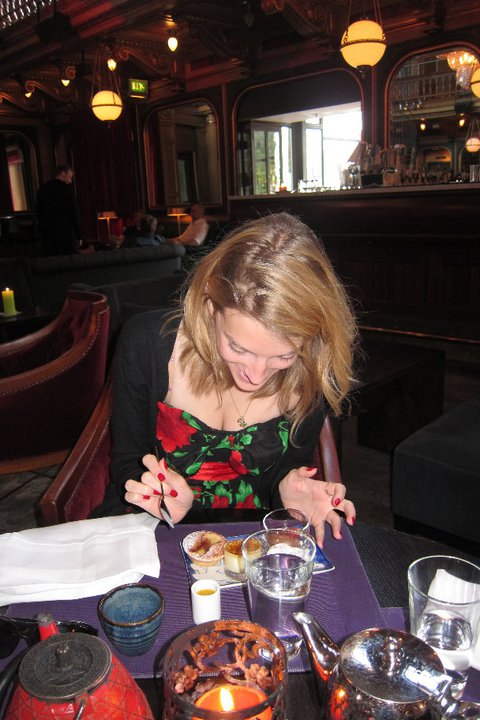 After our little make over we headed back home to find our friends all dressed up, waiting for us with drinks and cakes !

I was soooo happy to see that everyone had really got into it ! 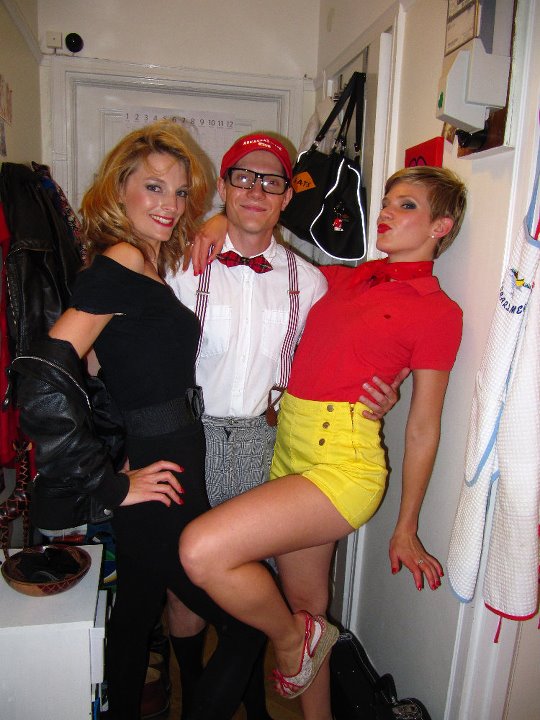 and i opened wonderful presents ! Always amaze to realize how well people know me !

After karaoking some of Grease songs we headed to the Restaurant, Marion’s Gastro Dinner the perfect place for a 50’s party theme.
We had really good burgers and cocktails and i got to blow some more candles on an amazing home made pink cake with a duck on top !!! 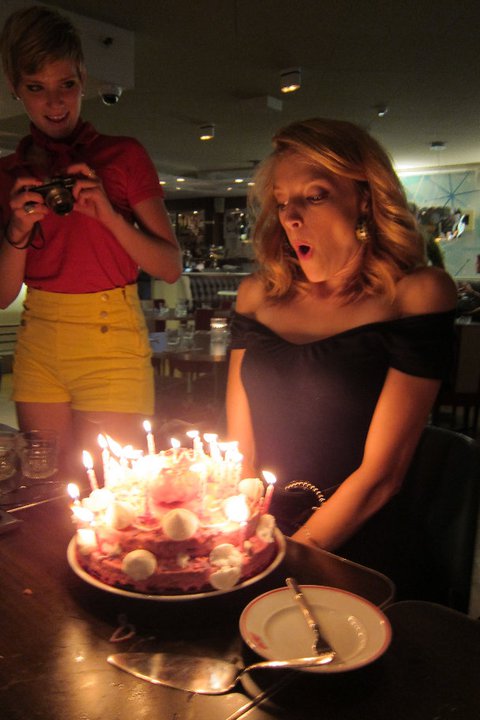 Then it was time to play Bowling ! Some of us rocked, most of us sucked but damn we all had a great time !

” because it doesn’t matter if you win or lose, it’s what you do with your dancing shoes “

well i only got to stay 30 min but it was a good 30 min with Champagne, bread (real bread) cheese and about 568 macarons.  And most importantly my friends and boyfriend all dressed up !

I was gone but i heard the rumor that Älskling ended up staying till the end, talking with H.Excellency, the Embassador himself.

For those who were “here” last year you might remember that for the last midsommar me and my friends had a blast being stuck on an island. This year, we decided to play it safe and didn’t use a boat. We rented a “stuga” by a lake. It was perfect !  We had so much fun !

We were 8 french people but we brought we us 2 swedes who made sure that we followed the rules of Midsommar:

dancing around the midsommar flaggstaff 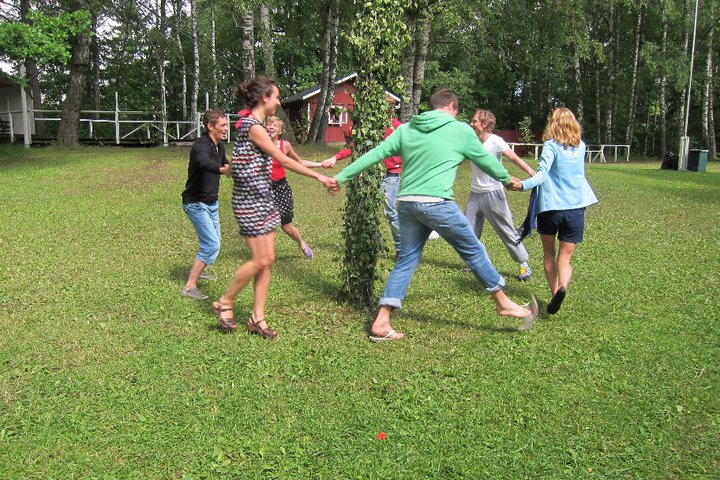 and eating soooo much food, doing so many barbecue that you feel you’re going to explode.

Yesterday was my little sister’s bday. 22 years old. Gosh. I was in Paris this weekend to celebrate.

Cripsin started a blog but seems to be a lazy blogger, it’s a shame because we’re missing out on all the wonderful things that come out of her imagination and that are eatable most of the time !

I am: Mo, 26, raspberry freak.
I am: Craving for clothes (old and new), travels, candles, funny hairdo, my sister's cupcakes, all kind of cookies...

"in my world, everyone is a poney, they eat rainbows and poop butterflies"

All pictures (exept when notified) are mine, please let me know if you wanna use them ;-)
Loading Comments...